Part 2: Turning the “regionalization” argument on its head

This post is the second in a series, following "Gravitating towards a City budget where people come first," published Nov. 28 2020. Link below.

At the November 18th Lebanon City Council meeting, several of the City Councilors who spoke in opposition to Upper Valley DSA’s Care Not Cops proposal alluded to Lebanon’s role as a regional hub in the Upper Valley in justifying the City’s massive police force. Lebanon’s resident population is around 13,500, but the daytime population is estimated to be about 30,000. The Route 12A commercial area, Interstate 89, and the hospital were all cited as regional destinations that each require significant investments in police and roadway infrastructure.

The simple governance argument for the City funding these services is that there are reciprocal benefits to the City - tax payments, job creation, economic spending, safety. So while we are spending money on police and infrastructure mostly for non-residents coming into Lebanon, at the end of the day, the economics supposedly make sense. At the same time, funding badly-needed human services for residents was derided at the November 18th meeting as a giveaway at the expense of local taxpayers that will just generate more demand for those services (see Part 1).

In many ways, it’s actually the opposite. Lebanon residents are on the hook for infrastructure and policing for the broader region, while being told there isn’t enough of their tax dollars left over to care for our residents in need. Meanwhile, the economic benefits to the City are shaky at best.

Consider the big box stores in West Lebanon. National chains like Walmart and Home Depot are masterful at shedding local property tax liabilities by constructing shoddy buildings that rapidly depreciate in value. After enough time passes, the buildings lose all taxable value. Other local taxpayers end up making up the difference.

We can see this happening right now in Lebanon. The properties highlighted in the image below contain Walmart, Price Chopper, Home Depot, Golf and Ski Warehouse, Best Buy, Applebees, and BJ’s, and are all owned by the same family. The parcels highlighted in yellow depict where the value of buildings on the land are currently assessed at $0. Eventually, the blue parcel (which hosts Walmart and Price Chopper) will join them. Because there is no sales tax in New Hampshire, this means that these properties generate taxes for the City as if they were vacant land. 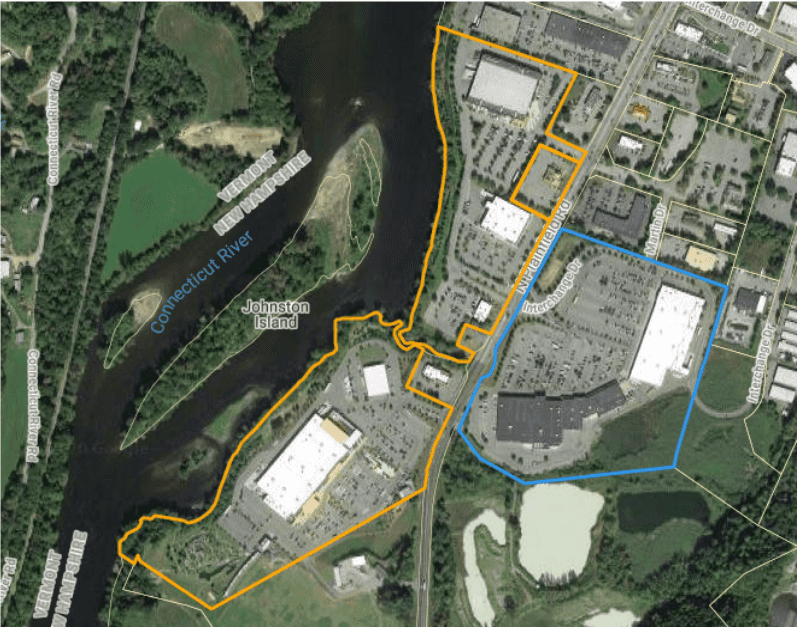 This is problematic, even just from an economics standpoint, because these properties do not behave like vacant land. Thousands of people from around the region travel through plus-sized City-maintained roadways and traffic lights to reach these businesses. These properties are also served by massive municipal water and sewer systems. Instead of investing in safer street designs, the City employs a police presence to enforce traffic speeds. Lebanon police are called to Walmart about 250 times per year. They even have reserved parking spaces in front (no lie).  As these incredibly profitable national chains shed their local tax responsibilities, it’s Lebanon residents who increasingly pick up the tab for infrastructure maintenance and so-called “policing services” for the Upper Valley region.

And lest we forget about corporate welfare for these national chains, who, in true capitalist form, steal the value of their workers’ labor to such a high degree that many employees must rely on forms of public assistance (not to mention getting their overtime pay stolen). We all pay for that too - a cruel yet critical component of American corporate welfare.

This is not a recipe for a healthy community - it’s a trap that many cities and towns around America have fallen into while chasing economic growth, only to become functionally bankrupt. When this happens, maintaining overbuilt infrastructure and bloated police forces consume the bottom line, with little or no money left to help residents in need.

The point here is that Lebanon taxpayers are already subsidizing “services” for the broader region (despite the warnings of fear mongering City Councilors that this would be the result of increasing funding for human services). The roads, well, we’re pretty much stuck with those now, though there’s many things we can do to both make them safer and reduce the use of policing. The City could also create a special assessment district where property owners pay an additional tax levy to fund nearby infrastructure, such as roads, water, and sewer.

Police? That’s a different story, and a deeply problematic one. City leadership thinks nothing of residents picking up the tab for Walmart’s publicly-funded security force to suppress the predictable symptoms of capitalism, but cannot imagine spending those same dollars on the health and human needs of our residents who are struggling.

What this shows is not a lack of available funding, but a crisis of priorities. Is subsidizing access, infrastructure, and security for hugely-profitable national chains really a higher priority than providing resources to our residents in need?

When Upper Valley DSA presented our Care Not Cops proposal to the Lebanon City Council, City leadership told us that their hands are tied; that the City’s status as a regional hub means there are certain fixed costs for policing that are untouchable.

This false notion must be vigorously opposed on paper and in practice. The City can drastically increase support for residents in need and create a safer, more just, and more welcoming community. It starts with taking many responsibilities away from the police, reallocating that funding to health and human services, and ending the free ride for the big box behemoths.